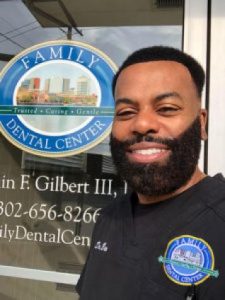 Dr. Ben Gilbert was born and raised in Philadelphia and the surrounding suburbs. After high school, he attended Howard University in Washington, DC, where he received his bachelor’s degree in plant biology. During his undergraduate years, Dr. Ben participated in student government, the pre-professionals club, and intramural basketball and football, where he won three football championships. Dr. Ben was also selected to be a student ambassador for Howard University.

After earning his bachelor’s degree, Dr. Ben attended Howard University College of Dentistry, where he received his Doctor of Dental Surgery. While in dental school, Dr. Ben was elected Freshman Class President and was selected to represent the dental school on a university-wide level as the Graduate Student Representative. He also held the position of Treasurer in the Graduate Student Assembly and was a member of the Student American Dental Association and the Student National Dental Association.

Upon graduation, Dr. Ben joined a dental practice in New York City, which focused primarily on implant and cosmetic dentistry. This is where his love of these specialties was born. Dr. Ben later went on to complete a 300-hour maxi course in implantology with one of the founding fathers of modern-day implantology, the late Dr. Norman Cranin, through Brookdale Hospital and New York University College of Dentistry. Dr. Ben is a member of the American Dental Association®, the National Dental Association and the Academy of General Dentistry.

Our dentist may recommend a dental crown to restore and protect your teeth. Call for more information and schedule your appointment!

Cosmetic dentistry in Bear, Delaware, can help you achieve a more beautiful smile. Contact us today to schedule your consultation with our skilled dentist.

Dr. Gilbert provides quality dental care for your entire family! We are dedicated to helping you maintain a healthy smile for a lifetime.

Save time at Family Dental Center by filling out our patient forms online! Please feel free to give us a call if you have any questions.

Our dentist provides dental implants to replace your missing teeth and give you back a healthy smile. Give us a call to make your appointment!